Shadeene Evans on pathway to be the best person, best soccer player she can be

Scouted by Matildas coach Alen Stajcic, coached by former Matildas player Leah Blayney and described by former Socceroo Craig Foster as “easily one of the best talents in the country for her age group”, 14-year-old Shadeene “Shay” Evans is a soccer player on the rise and the poster girl for Indigenous Football Week.
For the past eight months, Evans has been part of an elite soccer program at Westfield Sports High, living with the family of one of her classmates and training every day after school. It’s a long way from her home town of Borroloola in the Northern Territory, where she played soccer for fun and was surrounded by relatives on her traditional land.

“I miss family, going out bush and hunting and camping,” said Evans. “It’s bush, scrub and rivers, and we sleep outside with tents and a fire. It’s really small, a really remote community, and there’s not many people. But there’s a lot of soccer.”

At the age of nine, barefoot and following her brother, Evans was introduced to soccer by the John Moriarty Football program. Moriarty, who in 1961 was the first Indigenous soccer player to be selected for Australia, was also born in Borroloola, and has been running the program since 2012. It employs local coaches, provides hundreds of training sessions and games each year and links soccer to education, healthy lifestyle and opportunity.

“We want the kids to experience what life is like outside of Borroloola,” said Moriarty, whose program took a group of Indigenous kids to the FIFA World Cup in 2014.

“Shay was very taken by her trip to Brazil and wanted to further her career. She said, ‘I want to get an education’.”

Within a year Evans impressed Stajcic by representing the Northern Territory under-17 side at the national championships in Canberra.

Evans is a natural striker, strong and aggressive, described by Stajcic as “a great mover, well balanced, good speed and a good dribbler of the ball”.

After Stajcic’s recommendation and financial support from John Moriarty Football, in August 2015 Evans made the 3000-kilometre move to Sydney. At her first introduction to the school, she walked five metres behind Blayney and barely said a word.

“Shay’s definitely grown in confidence,” said Blayney. “She is on a pathway to becoming the best player, person and student she can be.”

To ease the transition, Evans has been welcomed into the household of her classmate Gracie Johns, who treats her like a sister, while the current Western Sydney Wanderers W-League goalkeeper Jada Whyman, 16, has become a close friend and mentor.

“It’s good having another Aboriginal girl here,” said Whyman. “It feels just like home.”
Although the focus is on Evans’ education, according to Stajcic: “As long as she puts in the hard work there’s no reason why she can’t play at W-League level or international football down the track.”
Indigenous Football Week is a major fundraising initiative run by John Moriarty Football in partnership with the Football Federation of Australia. The program, which launches this week, hopes to create a better supported pathway for Indigenous soccer players and expand its operations beyond Borroloola and Robinson River in the Northern Territory. Evans, the first John Moriarty Football graduate, says she has inspired others in her community.

“It feels really good to hear kids want to go to other places and have opportunities,” she said. “I feel really proud.”

facebook.com/JohnMoriartyFootball
#190 - Error validating application. Invalid application ID. Here are some possible solutions to fix the error.
instagram.com/footballjmf/ @FootballJMF
twitter.com/footballjmf @FootballJMF
JohnMoriartyFootball @FootballJMF
19 hours ago
Staying hydrated when playing sport is essential especially in the summer months. It’s so important to make sure that water we lose through sweating is replaced to avoid dehydration. When it’s really hot make sure to have your water bottle handy at all times and drink regularly. https://t.co/LSBvusltsU
View on Twitter 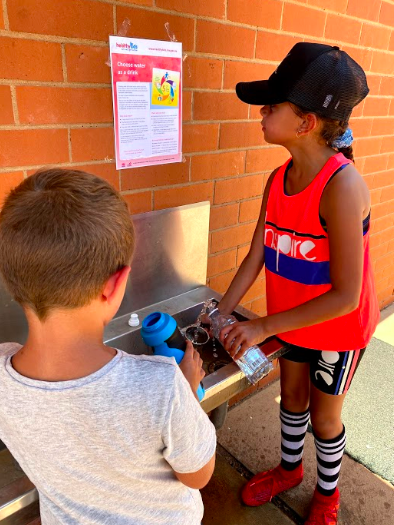 3
15
JohnMoriartyFootball @FootballJMF
4 days ago
JMF is committed to nutrition, providing just under 50,000 meals and snacks annually to children who participate in our football program. #eatwellplaywell https://t.co/gN8bW7KOOH
View on Twitter 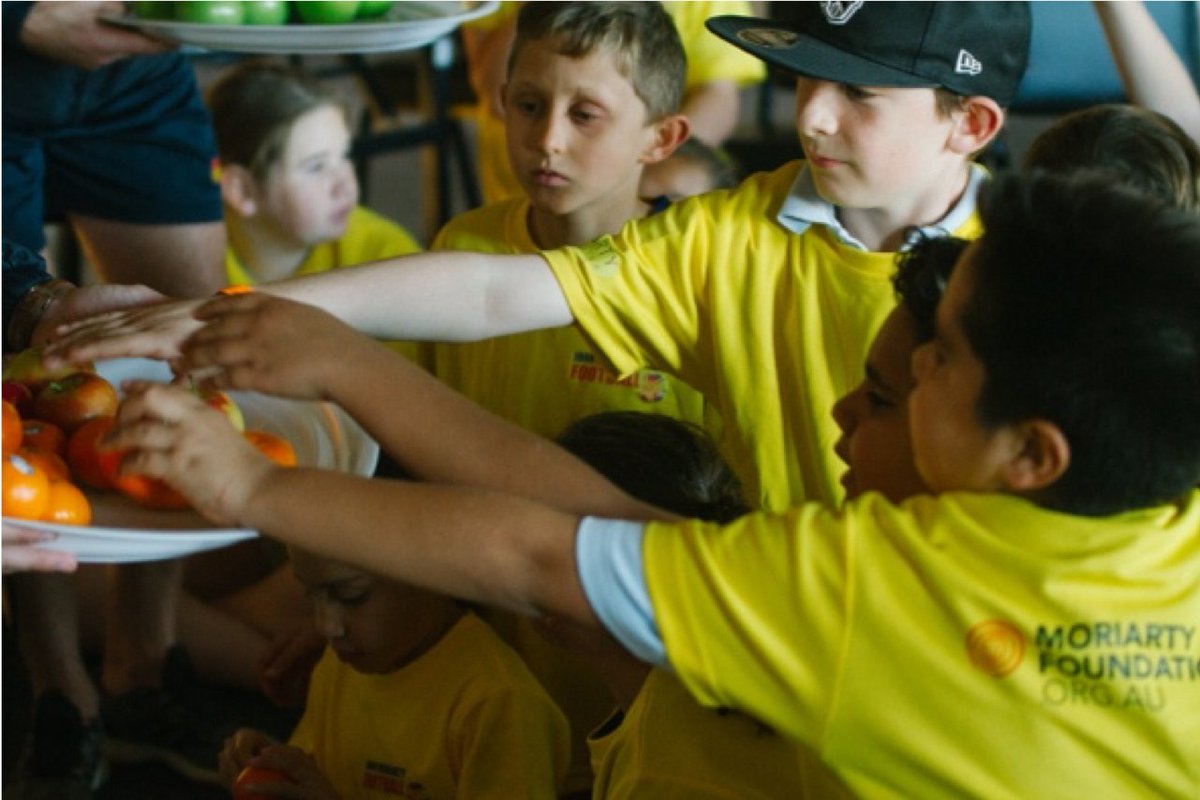 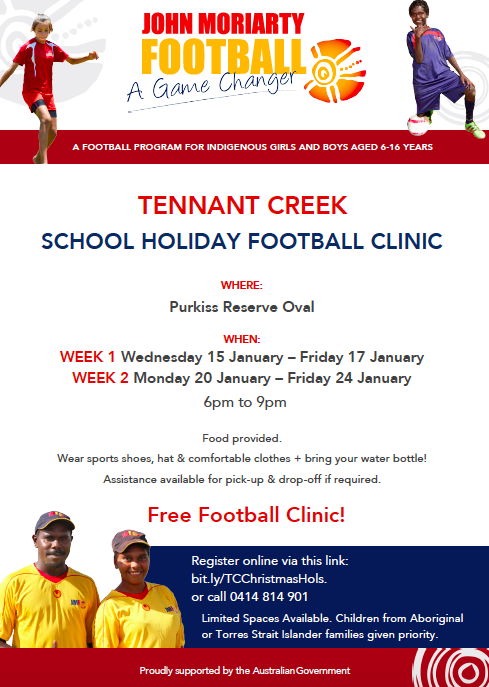 3
4
JohnMoriartyFootball @FootballJMF
1 week ago
JMF is passionate about the safety and wellbeing of all our staff and participants and so our Dubbo team brought in the New Year strong through a refresh course of their first aid skills! #SafetyFirst https://t.co/hlVUcG130B
View on Twitter 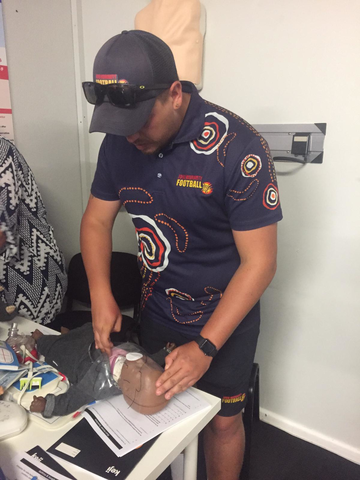 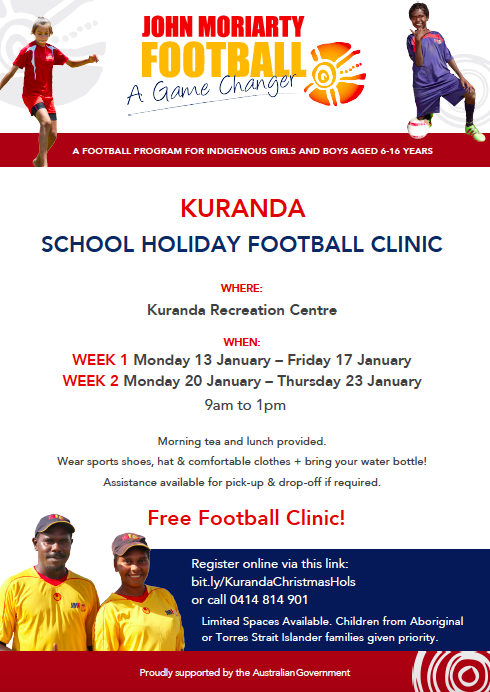 5
7
JohnMoriartyFootball @FootballJMF
2 weeks ago
Are you in Dubbo? We're hosting a School Holiday Clinic for 6-16s at Dubbo West Public School on Monday 13 Jan-Friday 17 Jan and Monday 20 Jan-Thursday 23 Jan. Morning tea and lunch provided! Call to book your spot on 0414 814 901 or register online here:  https://t.co/QF7gNoOJCa https://t.co/3y0VHSiuim
View on Twitter 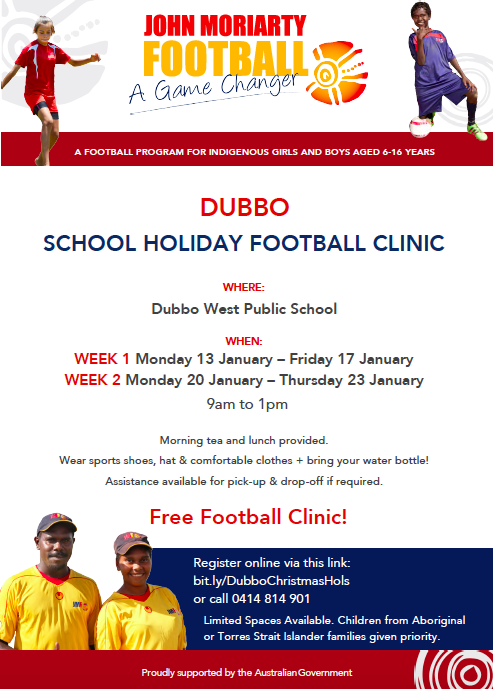